The government on Monday released details of a program announced during the last federal budget, an initiative that could see Canada’s housing agency contribute up to 10 per cent of the price of a buyer’s first home if certain conditions are met.

Under the fine print for the First Time Home Buyer Incentive program, which was announced in March and will officially launch in September, a first-time homebuyer who earns less than $120,000 can qualify. The Canada Mortgage and Housing Corporation would kick in up to 10 per cent of the purchase price of the home, providing the borrower comes up with the minimum amount for an insured mortgage, which is now at five per cent.

There’s also a requirement that the total value of the mortgage plus the CMHC’s portion don’t eclipse $480,000. A government official says that effectively means the program is only available for properties worth a maximum of about $565,000, regardless of whether or not they have met the other requirements.

If that bar is met, the CMHC may kick in an additional five per cent of the purchase price of a resale home. For a newly built home, the CMHC may contribute up to 10 per cent.

The stakes from the CMHC would be interest free, meaning no ongoing cost to pay down, like a mortgage does.

But the government says in exchange for its stake, the CMHC would get to participate “in the upside and downside of the change in the property value” — which means they would be entitled to any corresponding increase in the value of a home when the buyer eventually sells. On the flip side, the government would also be on the hook for any share of the loss if the property depreciates.

While a bill would be paid down the line, the savings over the years could add up. In the example above, the program would save a would-be borrower $286 a month in mortgage costs over the life of the loan, $3,430 a year.

“This will mean more money in the pockets of Canadians and will help up to an estimated 100,000 families across Canada,” said Jean-Yves Duclos, the Liberal MP and cabinet member in charge of the CMHC.

Financial adviser Rajiv Bissessur says the program will likely help some people, but ultimately, it amounts to just another form of debt for overleveraged borrowers.

“It’s an interest-free loan, but it’s still a loan they will have to pay back,” he said.

He also said the relatively low cap on prices and loan amounts won’t do much to help people who need it most, to buy in some of the more expensive markets. “We are not really fixing the problem.”

The program must be paid back within 25 years — or if the buyer sells before that — but there’s no financial penalty for buying the CMHC out of its stake, at whatever the fair value of the home is at the time.

Applications will be accepted as of Sept. 2 for home sales that will close no earlier than Nov. 1.

Funding for other programs too

In addition to offering these programs itself, the government has earmarked $100 million a year to help fund other organizations that already offer similar programs.

That’s a group that could include Toronto-based Options For Homes, which has worked with 3,000 homeowners over the last quarter century on a similar model — putting up money to help them become home purchasers, in exchange for a stake in the property down the line.

“[This] will go a long way to help to improve access to home ownership for middle-income earners and make progress in tackling affordability issues,” CEO Heather Tremain said.

“We’ve been using the shared equity mortgage model for more than 25 years and have seen first-hand the positive impact it can have on working Canadians looking to achieve the dream of home ownership.”

But some are critical of the government’s program because they say it does little to help buyers in expensive cities that need the most help.

Mortgage Professionals Canada, which represents brokers across Canada, noted the $560,000 cap on the program makes it essentially useless in Toronto and Vancouver, where even entry-level homes cost far more.

This @CMHC_ca chart shows some scenarios. While there may be “savings on monthly payment”, it’s more prudent to think of FTHBI “savings” more as payment deferment. You owe that money back to the government when you borrow new money against your home or sell it. 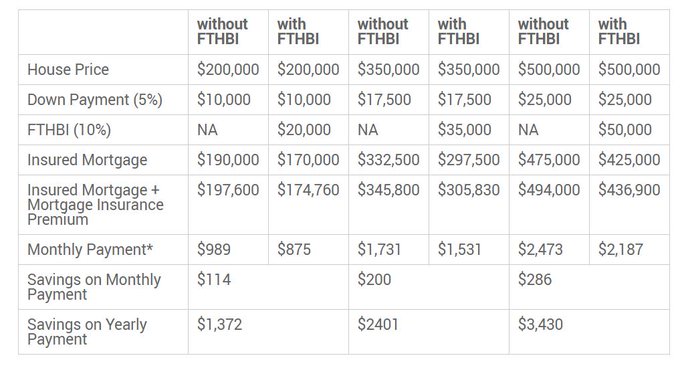 Again, FTHBI helps aspiring homebuyers buy homes which cost less than approx $500,000. While this program may help in some parts of Canada, the average May 2019 home price reported by @TREBhome in the GTA, where the announcement was made, was $838,540.http://trebhome.com/files/news_releases/news2019/nr_market_watch_0519.pdf … 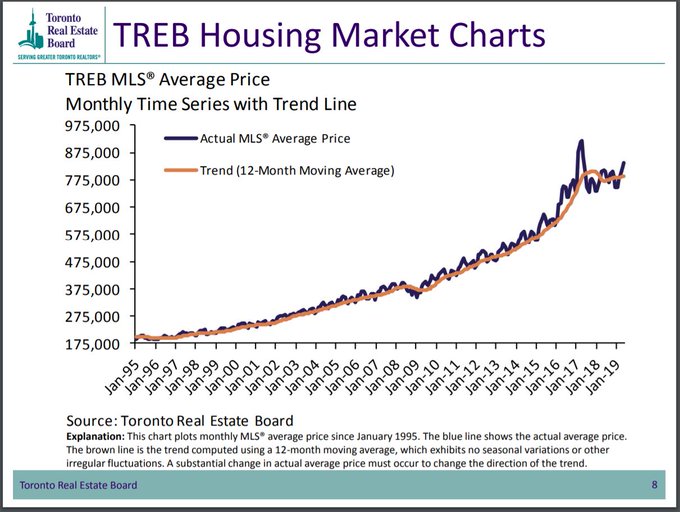 James Laird, president of mortgage brokerage Canwise Financial, said the government program could actually reduce a would-be buyer’s purchasing power in some cases. Eligibility is capped, where the amount being borrowed must be no more than four times the person’s annual income, but standard mortgage stress test rules allow for borrowers to get between 4.5 and 4.7 times their income.

“Those who would be attracted to the program would be Canadians who are trying to purchase at their maximum qualification,” Laird said. “However, because the program diminishes how much you can qualify for, it doesn’t serve the needs of the group it is targeted at. Canadians can get a larger loan by not participating in the program.”